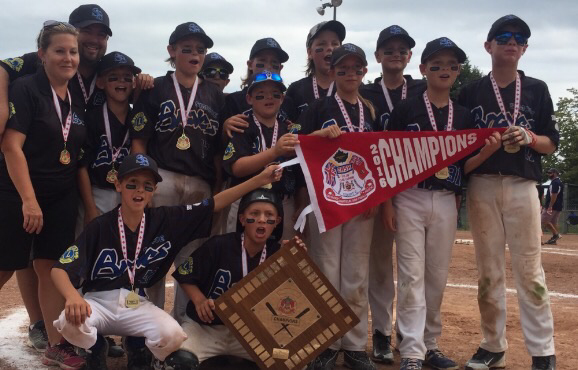 Disagree? Just ask the teams who were forced to take on the Simcoe Braves at the Ontario Amateur Softball Association provincial squirt championships this past weekend in Cobourg.

After four contests, the first-year squad – which is made up of players from across Norfolk County – claimed the ‘C’ title, the first of its kind in Simcoe since 1987.

“It’s been the key to any game we’ve won all season long – our kids run the bases better than anybody, I would say, in the province,” said Simcoe coach Adam Walker. “Once we get kids on base, other teams just can’t keep up with us.”

Simcoe stormed through its first two games, topping Curve Lake and Laurentian Valley by a combined score of 19-5. An all-important Game 3 came late Sunday morning vs. Campbellford. The winner would move on to the final while the loser had to enter a win-or-go-home semi-final vs. Oshawa. Down 5-1 in the bottom of the seventh, the Braves battled back to tie the score with Zach Dumanski standing on second base. Braden Moore then hit an infield single to the shortstop, but instead of stopping at third Dumanski headed for home to plate the winning run.

Leaning on star hurler Zach McCracken like they had all weekend, Simcoe went on to beat Campbellford 12-5 later that day to earn gold.

Word of the team’s win quickly made its way back to Norfolk.

“The amount of congratulations texts, emails, Facebook messages that I’ve gotten over the last two days has been unbelievable,” said Walker, who started the team along with fellow coach Shawna Cloet this past winter.

“This was our year to let the kids feel it out a little bit and to win a championship of this magnitude, and to be the first ones to do it in so long, it’s pretty special. It’s special for myself, for Shawna, for all the kids to see their hard work pay off. It was a very special feeling on Sunday to watch them put their medals on.”

By no means has the rest of the province heard the last of the Braves either. They’re already focused on going even further in the years to come.

“The kids want to get back and start practicing tomorrow. They know that we’re on a three-year plan to get to a national championship,” Walker explained.

“It’s a great step for these kids to get a taste of winning something like this to build for something bigger down the road.”

Plenty of on-field skills played a major part in Simcoe’s success story, not to mention some timely hitting. So too did several high-level coaches including George Ryder and Dave Bourne giving their time to ensure the group – many of whom had never played softball before – hit the ground running.

“We definitely wouldn’t be here without their help and everybody in the softball community who helped put this together,” Walker pointed out. “It was a little bit of a pipe dream when it started and it’s been a good ride for Year 1. Hopefully, we can continue.”