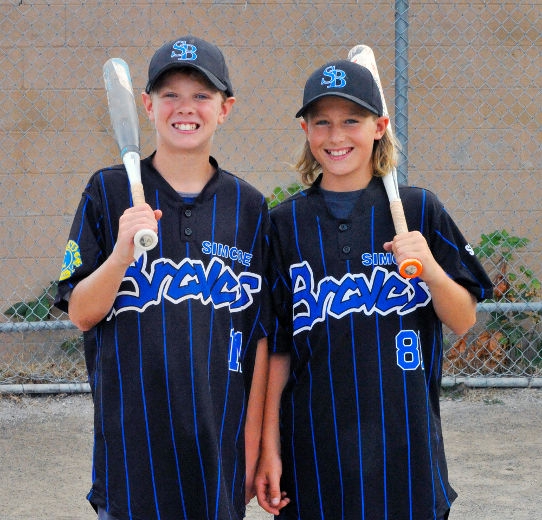 SIMCOE – It’s taken just a few months for the Simcoe Braves to go from first years to first rate.

The area’s new competitive squirt (12-and-under) fastball team, one made up of athletes from around the county, will head to Cobourg for the Ontario Amateur Softball Association Provincial ‘C’ Championships this coming weekend.

Back in May, the squad played its first ever game within the Haldimand Erie Fastball League – now they’re expected to challenge for a provincial title.

“I think we’re feeling pretty good because they’re doing better than what we expected them to do,” said Shawna Cloet, who coaches the team along with Adam Walker. “They’ve come from a first-year team where we didn’t know if we were going to get any strikes to a team that is beating the top teams in the province which is phenomenal, it’s a great achievement for us.”

In fact, many of their games have been blowouts. That comes thanks in large part to the work put in by a small group of players, many of whom have played hardball in the past.

“They work extremely hard. We focus a lot on fundamentals and I think we just have a great group of kids that really want to play the game so therefore they excel at it,” Cloet added.

“We are exceptional defensively and hitting. I would say our weakest point is pitching but then again, they’re first-year pitchers.”

Simcoe native Zach Dumanski was drawn to fastball’s quick pace, and the chance to compete alongside a talented crop of players.

The roster, he said, has a few goals in mind as the 2016 season finale looms.

“We just want to work hard and when we get to provincials we want to try and do as best as we can in them,” said the youngster.

“Try your best and when you get out to the field, play your position well and try not to make any mistakes.”

The Braves have been right in the thick of things in the two previous tournaments they’ve entered. Doing so again, Cloet said, should be no issue.

“We’re in a division that, honestly, we should be a top team – we should be a contender for sure,” she said. “We’re definitely not in over our heads by any means. We should go there and succeed.”